Breed: Standard Poodle
Alphabetically: S
Country: All
Region: All
Country of Origin: N/N
Color: Black, White, Red, Blue
Life Expectancy: 12 – 15 years
Height: 15 inches (38 cm) or more
Weight: Males 45 - 70 pounds (20 - 32 kg) Females 45 - 60 pounds (20 - 27 kg)
Litter Size: 3 - 8 puppies
Hypoallergenic: No
Ad ID: 171978
The exact origin of the Poodle is unknown, but they have been used in France and Germany since the 1400’s as hunting and retrieving dogs, water dogs, and companions. The Poodle has been known throughout Western Europe for at least 400 years and is depicted in 15th century paintings and in bas-reliefs from the 1st century.
The subject is controversial of where the dog was officially developed and no one really knows the breed true country of origin. France has taken a claim on the origin, but the AKC gives the honor to Germany, where they say it was used as a water retrieval dog.
Other claims have been Denmark, or the ancient Piedmont. What is certain is that the dog was a descendant of the now-extinct French Water Dog, the Barbet and possibly the Hungarian Water Hound. The name "Poodle" most likely came out of the German word "Pudel," which means "one who plays in water."
The "Poodle clip" was designed by hunters to help the dogs swim more efficiently. The Standard Poodle is a medium- to large-sized dog. When groomed to show dog standards the body is meant to give off a square appearance. It is approximately the same length as the height at the withers.
The skull is moderately rounded with a slight but definite stop. It has a long, straight muzzle. The dark, oval-shaped eyes are set somewhat far apart and are black or brown. The ears hang close to the head and are long and flat. Both the front and back legs are in proportion with the size of the dog.
The topline is level. The tail is set and carried high. It is sometimes docked to half its length or less to make the dog look more balanced. Dewclaws may be removed.
The oval-shaped feet are rather small and the toes are arched. The coat is either curly or corded. It comes in all solid colors including black, blue, silver, gray, cream, apricot, red, white, brown or cafe-au-lait. While it does not make the written show standard, some breeders are breeding parti-colored Poodles. See grooming for different types of Poodle clips.
Temperament: Intelligent, loving, loyal, and mischievous
Health Problems: A long-lived breed, Poodles are, nevertheless, subject to many genetic diseases. Runny eyes, cataracts and progressive retinal atrophy, which may cause blindness. Allergies and skin conditions are common, possibly due to unskilled use of clippers or allergies to shampoo and/or color reinforcer. Hip dysplasia and ear infections are also common. They are prone to Von Willebrand's Disease. Brown Poodles tend to become prematurely gray. Prone to bloat, so it is wise to feed your Standard 2-3 small meals a day, rather than one large one. 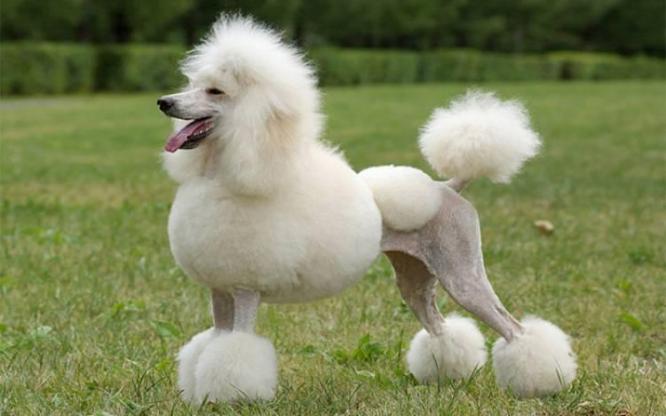 The exact origin of the Poodle is unknown, but they have been used in France and Germany since the 1400’s as hunting and retrieving dogs, water dogs, and companions. The Poodle has been known throughout Western Europe for at least 400 years.