Breed: Spanish Mastiff
Alphabetically: S
Country: All
Region: All
Country of Origin: Spain
Color: Black, Brindle, Fawn, Wolf-Sable, Red, Yellow
Life Expectancy: 10 – 12 years
Height: Female: 72–88 cm, Male: 77–88 cm
Weight: Female: 52–77 kg, Male: 90–100 kg
Litter Size: 3 - 8 puppies
Hypoallergenic: No
Ad ID: 171975
The Spanish Mastiff is a native to the region of Estremadura in Spain. He was for some time popular in that country. He is believed to originate from the ancient Molosser dog that can be traced back to 2000 years B.C. These dogs were probably introduced to the Iberian Peninsula by Phoenician tradesmen who had brought them from Syria or India.
Mastiffs have been known to exist in Iberia for thousands of years, and the Spanish Mastiff was shown regularly at dog shows early in the 20th century, however, no Standard for the breed was drawn up until 1946. The Spanish Mastiff is a natural guard, and his inherent abilities led him to many crossings with other breeds to perfect the lesser breeds type.
It is popular in Spain as a guard of both livestock and the home. The Spanish Mastiff is a stocky, robust, rustic-looking dog. It is very large and rather lengthy with a massive chest and the power of a heavyweight contender.
The body should be rectangular, well-muscled and with strong bone. It has a massive, well-proportioned head with a deep muzzle, strong jaws, full lips and a characteristic dewlap on the neck, showing clearly his mastiff type. The Spanish Mastiff has double dewclaws on its hind feet, a characteristic this breed shares with such breeds as the Great Pyrenees.
The short coat is straight with a dense under-layer and an almost wooly texture. The skin should be abundant and loose on the body. Colors include plain yellow, red, black, wolf-grey and red-brown, or broken colors or spotted. White should not be too dominant. The center of the back and the tail have longer hair.
The eyes are small, commonly sporting a relaxed, carefree expression masking his ever watchful eyes. The ears are pointed and pendent. The tail is fringed and carried low. Although a very heavy breed, its movement should be free and flexible.
Temperament: Affectionate, Noble, Determined, Self-assured, Intelligent
Health Problems: Beware of hip dysplasia, heart problems and Entropion (inversion of the eyelids). Also pano-ostiosis (growing pains), which occurs when they are growing puppies. This breed is prone to bloat. It is wise to feed the Spanish Mastiff several small meals rather than one big one. Births are difficult in some Spanish Mastiffs and C-sections are often needed. This breed drools and slobbers and may snore loudly. 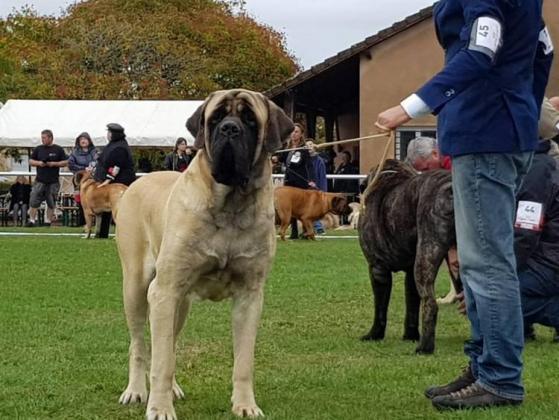 The Old English Mastiff is a massive dog. The Mastiff has a large, heavy square head with a well marked stop between the eyes. The muzzle should be half the length of the skull. The medium-sized brown to dark hazel eyes are set wide apart.