Breed: Shiba Inu
Alphabetically: S
Country: All
Region: All
Country of Origin: Japan
Color: Red Sesame, Black Sesame, Black & Tan, Red, Sesame
Life Expectancy: 12 – 15 years
Height: Male: 35–43 cm, Female: 33–41 cm
Weight: Male: 8–11 kg, Female: 6,8–9 kg
Litter Size: 3 - 7 puppies
Hypoallergenic: No
Ad ID: 171967
The Shiba is the smallest of the Japanese native breeds, which include the Kai Inu, Hokkaido Inu, Kishu Inu, Shikoku Inu, Tosa Inu and the Akita Inu.
Despite its smaller size it was bred to hunt small wild game, bear, boar and to flush birds. The name Shiba means, both "small" and "brushwood" in Japanese. It may have been named after the terrain the dogs hunted in or the color of the Shiba's coat, or perhaps the dog's size. The word "Inu" means "dog."
As with many breeds, the second world war nearly did the breed in. After the war was over, several breeding programs worked to bring the breed back to safe numbers. The Shiba is a small, compact dog. The head is in proportion with the body. The round muzzle has a moderate stop and tapers slightly toward the nose.
The tight lips and the nose are black. The teeth meet in a scissors bite. The deep-set eyes are triangular in shape and dark in color. The eye rims are black. The erect ears are triangular in shape and small in proportion to the rest of the body. The front legs are straight. Dewclaws may be removed.
The high-set tail is thick at the base, curled and carried over the back, either in a ring or with a sickle curve. The coat is double with a soft, thick undercoat and a stiff, straight outer coat.
Coat colors come in red, or red with a little black overlay, black with tan markings, sesame with red markings, all with a cream, buff or gray undercoat. Markings should appear on the cheeks and sides of the muzzle, throat, underside and chest. There may be white on the legs, tip of the tail and above the eyes.
Temperament: Charming, Fearless, Keen, Alert, Confident, Faithful
Health Problems: Prone to hip dysplasia, PRA and patellar luxation (slipped kneecap). 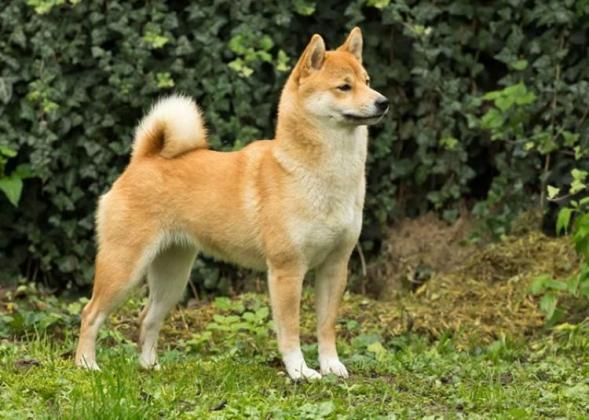 The Shiba is the smallest of the Japanese native breeds, which include the Kai Inu, Hokkaido Inu, Kishu Inu, Shikoku Inu, Tosa Inu and the Akita Inu. Despite its smaller size it was bred to hunt small wild game.