Breed: Rottweiler
Alphabetically: R
Country: All
Region: All
Country of Origin: Germany
Color: Black & Tan, Mahogany
Life Expectancy: 8-13 years
Height: Female: 56-63 cm, Male: 61-69 cm
Weight: Female: 35-48 kg, Male: 50-60 kg
Litter Size: 4-15 puppies
Hypoallergenic: No
Ad ID: 171983
Rottweilers are reputed to have guarded livestock during the march of the Roman Soldiers across Europe, leading to the breed's arrival in Germany. The Rottweiler has a massive, powerful body. Muscular and athletic, it has a broad head and rounded forehead.
The muzzle is well-developed with a scissors bite. Its eyes are dark with an expression of goodwill and loyalty. The ears are triangular, carried forward, and its nose is wide and black. The lips are black and inside the mouth it is dark-colored. The tail is customarily docked.Often born with rear dewclaws, these are usually removed when the tail is docked.
The coat is short, hard and thick. It is black with brown markings on the cheeks and muzzle, paws and legs. A red color with brown markings also exists. Rottweiler bitches often have large litters; 12 puppies are not uncommon.
Temperament: Steady, Good-natured, Fearless, Devoted, Obedient, Alert, Confident, Self-assured, Calm, Courageous.
Health Problems: Due to poor breeding practices, some breeds are prone to certain genetic health problems, such as hip dysplasia. This doesn't mean that every dog of that breed will develop those diseases; it just means that they're at an increased risk. If you're buying a puppy, it's a good idea to find out which genetic illnesses are common to the breed you're interested in, so you can ask the breeder about the physical health of your potential pup's parents and other relatives.

Rottweilers are reputed to have guarded livestock during the march of the Roman Soldiers across Europe, leading to the breed's arrival in Germany.The Rottweiler has a massive, powerful body. 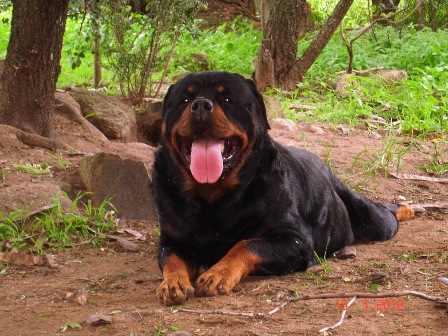