Breed: Newfoundland
Alphabetically: N
Country: All
Region: All
Country of Origin: Canada, England
Color: Black, Black & White, Brown, Grey
Life Expectancy: 7 – 10 years
Height: Male: 69–74 cm, Female: 63–69 cm
Weight: Male: 60–70 kg, Female: 45–55 kg
Litter Size: 4 - 12 puppies
Hypoallergenic: No
Ad ID: 172007
It is not known when the breed arrived in Newfoundland, but in 1732 fishermen used large bear-like dogs to help drag nets and pull carts.
The Newfoundland is a stately, strong, and massive dog with a broad heavy head. Elegant, harmonious, agile and hardy. The wide muzzle is rather short and squared-off. The small triangular ears are pendant. The small eyes are dark brown; the conjunctiva should not show as it does in the St. Bernard.
The nose is generally black except on bronze-colored dogs, which have brown noses. The feet are webbed for better swimming. Dewclaws should be removed on the hind legs. The tail hangs down. The water-repellent long outer coat is flat, oily and slightly wavy with a thick oily undercoat. Dogs that live indoors, however, tend to loose their undercoats.
The coat most often comes in black, (sometimes with a little white on the feet, end of the tail, or chest) black with blue highlights, bronze sometimes also in brown or gray and Landseer (White with black markings), note: in the USA and Great Brittan the Landseer is considered the same breed as the Newfoundland, however in some European countries the Landseer is a totally different breed than the Newfoundland.
Landseers in Europe have longer legs than newfies, Landseers are not so massive, they are more sporty dogs. In shows, they compete separately.
Temperament: Trainable, Sweet-Tempered, Gentle
Health Problems: Prone to a hereditary heart disease called sub-aortic stenosis (SAS) and hip dysplasia. Be cautious that the Newfoundland does not get fat. 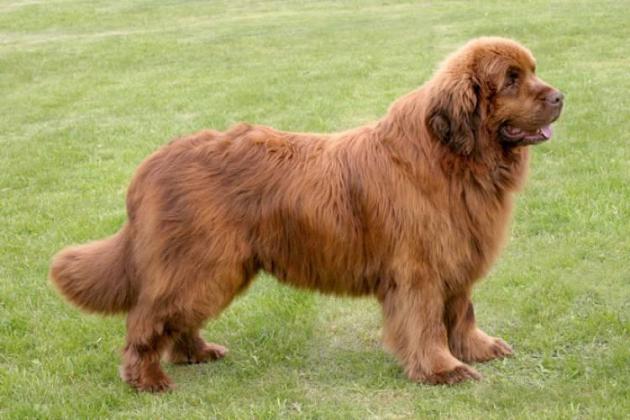 It is not known when the breed arrived in Newfoundland, but in 1732 fishermen used large bear-like dogs to help drag nets and pull carts. The Newfoundland is a stately, strong, and massive dog with a broad heavy head.