1/2
Breed: Japanese Spitz
Alphabetically: J
Country: All
Region: All
Country of Origin: Japan
Color: White
Life Expectancy: 10 – 16 years
Height: Male: 30 – 38 cm, Female: 25 – 35 cm
Weight: 11 - 20 pounds (5 - 10 kg)
Litter Size: 1 - 6 puppies
Hypoallergenic: No
Ad ID: 172030
No one knows for sure of the origins of the Japanese Spitz, but some claim it is descended from the native Siberian Samoyed. This theory is controversial, but those who believe it claim Samoyeds were strictly bred for smallness, with the end result being the Japanese Spitz. Everything about the Japanese Spitz strongly suggests that it is simply a small version of the Samoyed.
Creation of the breed commenced in the late 1800s. Very popular in Japan in the 1950s, although numbers in its native land have declined, it has become increasingly popular in Europe and North America.
The longhaired coat of the Japanese Spitz has a thick under-layer that is always pure white. The tail is covered with long hair and is carried curled over the back.
The coat is short on the bottom half of the legs, with breeches on the hind legs and feathering on the forelegs. The ears are small and pointed upright, and the muzzle tapers slightly.
The large oval eyes are dark and slightly slanted, and the nose and lips are black. The face of the Japanese Spitz is wedge-shaped. There is dense feathering on the feet.
Temperament: Playful, Affectionate, Intelligent, Obedient, Companionable, Proud
Health Problems: They are a healthy breed with very few genetic problems. The main health concern for Japanese Spitz is the development of Patellar luxation, a condition in which the kneecap dislocates out of its normal position. They can also be prone to runny eyes, which is most commonly due to having tear ducts that are too small, or an allergy to long grass or stress. It is rarely caused by any serious eye defect. 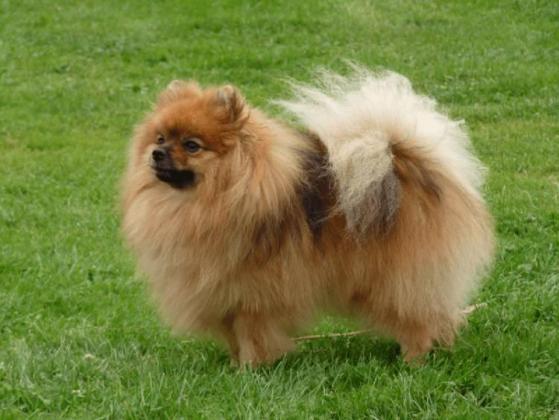 The German Spitz is directly descended from the profusely coated Nordic herding dogs, such as the Samoyed and the Lapphund. It was said to have arrived in Europe with Viking plunderers. German literature refers to the Spitz as early as 1450.